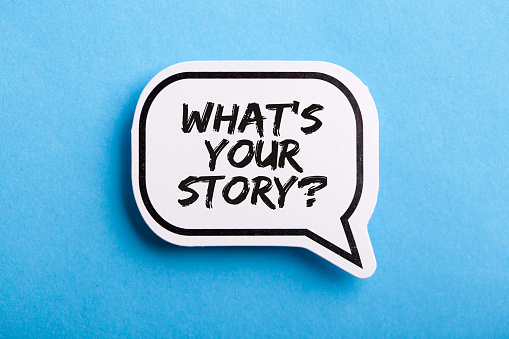 Associations and businesses alike are recognizing the power of stories to communicate important information as well as inspire their audiences to action. But what makes stories effective? And how do we tell them with purpose so that they achieve the desired result?

Stories are a form of virtual reality that evolved in humans as a way to make communication and learning easier. Stories pre-date not only written language but also spoken language — you can picture our pre-historic ancestors around the fire acting out stories that happened to them that day.

Because stories are essential to our survival as a species, they remain the easiest and most powerful way to communicate with people.

Stories are so ingrained in our culture that they often influence us more powerfully than facts. When Peter Benchley wrote the best-selling novel Jaws in 1974, he didn’t realize that his book, and the blockbuster film that followed, would change human behavior on a massive scale.

In the decades following the story’s release, recreational swimming in the ocean declined dramatically, while shark hunting became increasingly popular. All this despite assurances from scientists that shark attacks were extremely rare and people had nothing to fear. This behavior change gave rise to a term called The Jaws Effect, which described the power of a story to transcend facts in the public mind.

So how can you use this powerful tool of communication to achieve your organization’s goals?

The Power of Purpose – Understanding Your Audience and Your Message

A purposeful story starts with knowing who you are communicating with, and what you want them to do or think.

Once you know your audience, you want to make sure the story is told from a perspective they’ll relate to. You’ll also want to have a clear underlying message. Remember, in purposeful storytelling, your story is simply a delivery vehicle. If your message doesn’t get across then the story has failed.

How to Structure a Purposeful Story

The basic structure of a story is called an arc. The most popular arc is shaped like a smile and has a happy ending. When telling a story with a purpose, the arc generally has five plot points:

1. Set-up: We introduce the main character and what they want. Generally, the character is a person, although it could also be an organization.

2. Problem: The character encounters an obstacle that keeps them from what they want to achieve.

3.Turning Point: The problem gets worse and the character hits rock bottom. Then something happens that makes the character’s situation improve.

4. Insight: The character learns something or develops a different attitude or approach to their problem.

5. Conclusion: With the use of this new insight, the character overcomes the obstacle and achieves their goal.

Let’s look at an example of how we can use these points to create a story that could be used to increase an association’s membership. Let’s assume The Canadian Association of Professional Speakers (C.A.P.S.) is on a recruitment and retention drive and decide to tell success stories about how C.A.P.S has helped its members. In this case, they tell the story of a speaker named Jane Good. Here’s how the basic story arc might look. I’ve included the steps in parentheses.

(Setup:) Jane was a successful business expert who became an in-demand speaker following a prominent interview on a national broadcaster.

(Problem:) The first year she coasted on her fame, but in the second, her speaker earnings plateaued.

(Turning point:) By the third year, the phone stopped ringing. She needed to get more bookings and also wanted to learn more about the craft of speaking.  She found out about the Canadian Association of Professional Speakers and joined up.

(Insight:) Through C.A.P.S., Jane built relationships with other speakers which led to more referrals and opportunities. Through association meetings and professional development programs, she learned not only how to become a better speaker, but also how to create effective marketing and speaker-specific business systems that helped her build consistent revenue streams.

(Conclusion:) Two years after joining C.A.P.S., Jane doubled both her bookings and her income, and has become one of the most well known and respected speakers in the industry.

You can see the power in this simple narrative structure. If the person you’re trying to attract sees themselves in the main character and has similar problems or issues, they’ll want to follow the same path to success. That path would lead them to the exact outcome you want — in this case joining your association.

Once you construct your key stories, they can be used in many different types of media including web pages, presentations, newsletters, podcasts, video, and even one-on-one conversations.

True-life stories about an identifiable person or organization tend to have the most powerful impact and are a good form of social proof. However, in some instances, you may need to use a hypothetical character, or change certain details for privacy reasons. You can also use artistic license to combine elements from two or more stories into one. In fact, due to the challenges of telling a complex story in a short period of time, you have a fair bit of leeway to edit the details as long as you don’t make specific claims that are untrue.

How you can start using stories to benefit your organization

Purposeful stories don’t need to stop with association membership. Stories can also be used to highlight how your association serves its community. Health Partners, a Canadian charitable organization that provides services for people with chronic illnesses, has an entire webpage (www.iamlivingproof.ca) of short videos devoted to telling the stories of those they have helped. These stories act as social proof that donations to their charities make a difference in real people’s lives.

To sum up, stories are an all-purpose communication tool that can be used by any organization to manage change, sell ideas, and inspire action. Regardless of the media you use, stories wrap your message in an intimate human experience that has the greatest impact on your audience.

Jason Reid is CEO of Power Story Master. He works with individuals, associations, and businesses, helping them tell purposeful stories, and create entertaining presentations that influence, sell, and inspire action. A professional speaker, former TV writer, and award-winning journalist, Jason recognizes the power of good storytelling to communicate ideas in all aspects of business, leadership, and life.