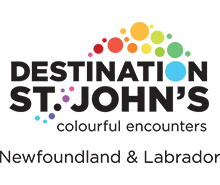 The destination that brought you musical spoons and tin whistles doesn’t always act its age!

St. John’s, the capital of Canada’s youngest province, Newfoundland and Labrador has been welcoming adventurers from all corners of the world for 500 years.

St. John’s is a storied city whose people hold fast traditions while embracing modern amenities. Rich with history, rife with culture, and sprawling with natural beauty, St. John’s is a city of exaggerated proportions.

Being the most easterly point merits its very own time zone, half-an-hour off-kilter with the rest of the world.  It is also the only place where crossing of the migratory paths of the humpback whales and the icebergs can be seen from land. Cool!

Beautiful vistas, unique culinary experiences and eclectic architecture are the start to an urban experience that feels like no other. As you weave through the winding alleyways you’ll encounter fashionistas, chefs and musicians. You will be dwarfed by towering Cathedrals, ancient trees and the harbour’s high peak hillsides and instantly know that the ties to a European past are strong.  There is inexplicable sense that you have walked the streets before, a familiarity that can’t be explained and a friendliness of the colourful characters you meet that has to be experienced to be understood.

In 2016, the expanded St. John’s Convention Centre will make an already a great host city—an even better one!

And when it comes to planning your event, Destination St. John’s has your back!